Cumberland Crossing by OceanView offers a safe haven for these sustainability-minded retirees. 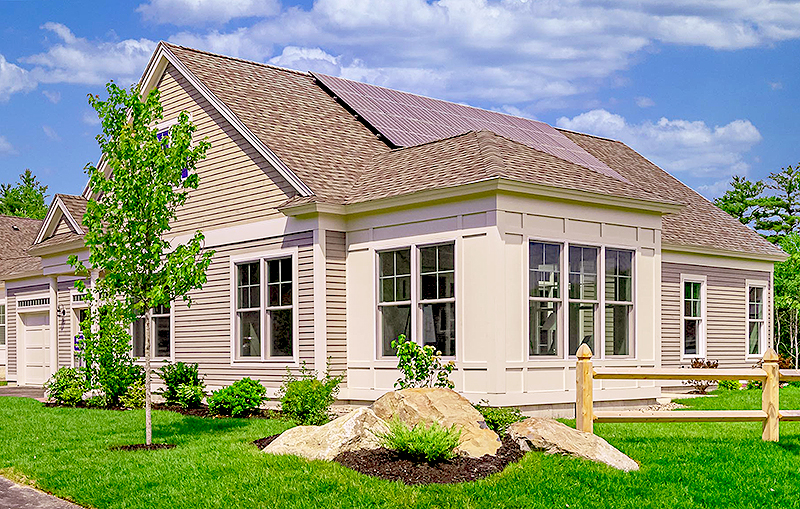 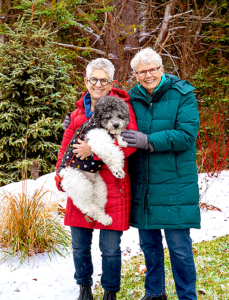 Hopkinson and Adams — and their cockapoo, Buddha — near their new cottage in Cumberland Crossing. Together 30 years, the couple wanted to be in a community that could support their future needs as they aged, so they liked that it was part of the OceanView community. “Cumberland Crossing was the perfect fit,” Hopkinson says.

Three years ago, Lea Hopkinson and Peg Adams moved from Rowley, Massachusetts, to Santa Rosa, California, to be near their son and grandson and enjoy the beauty of the mountains, the vineyards, and the ocean. But almost immediately, wildfires started figuring prominently in their lives. They arrived on the heels of the Camp Fire, one of the deadliest wildfires on record, which destroyed an area near their new home. Within a year, there were prolonged power shutdowns, and the couple had to keep their cars packed for evacuation.

The September 2020 Glass Fire, which burned nearly 67,000 acres, charred the peaks of the Mayacamas Mountains outside their front window and destroyed some neighbors’ homes. Hopkinson and Adams had to evacuate in the middle of the night onto a single road where they were stuck in traffic, unable to move while the flames blazed closer.

“It wasn’t a one-off that won’t happen again,” says 77-year-old Hopkinson, a retired physical therapist and acupuncturist. “Wildfires are happening every year.”

The pandemic brought the risks into sharp focus for Hopkinson and Adams. The couple bought a tent that attaches to the back of their SUV, so that if they had to evacuate again, they’d have a safe place to stay where they could be isolated from others.

“With each successive fire we were more and more on edge,” says Adams, who’s 75 and retired from a career in education. “It was not a way that we anticipated going into our next decade of retirement.”

Last September, the couple moved to Cumberland Crossing by OceanView, a 55-and-older development in Cumberland.

Maine has long been a destination for retirees, but as extreme-weather events like floods, hurricanes, and wildfires wallop the coasts, the state is increasingly appealing for couples like Hopkinson and Adams, who want to be near the water without living in fear of having their lives upended by natural disasters. Of course, no area is immune to severe weather (and Maine is known for its winters), but in terms of the number of natural disasters, the Pine Tree State is ranked 32 among the 50 states, according to the Federal Emergency Management Agency. It’s also among the best poised to navigate public-health risks from climate change, says a 2021 analysis by Johns Hopkins University and the nonprofit Trust for America’s Health. The study gauged each state’s vulnerability and factors like geography, public-health interventions, and infrastructure adaptations. Maine was among eight states considered least vulnerable and most prepared.

The chronic threat of hurricanes informed Susan McIntosh’s decision to move from the Houston area to Maine when she retires in 2023. In 2017, the now-71-year-old Rice University anthropology professor rode out Hurricane Harvey in her home and spent the time in fear that her lab, two stories underground in downtown Houston, would be flooded. During a Valentine’s Day storm that caused record low temperatures in 2021, she lost power and relied for days on her hand-crank radio for news and gas fireplace for heat.

“You realize what a thin veneer of utility keeps us in our current lifestyle,” McIntosh says. “You very quickly feel isolated.”

In retirement, McIntosh wants to be near family in Portland and back in a rural setting, like the one where she grew up, in western New York. And, after living through catastrophic storms, she’s ready for some more meteorological peace of mind.

“Unpredictable weather is going to hit everywhere,” she says, “but I want to avoid the extremes.”

Hopkinson, Adams, and McIntosh will be neighbors at Cumberland Crossing by OceanView, a 55-and-older development in Cumberland. Because they’ve contended with extreme-weather events exacerbated by climate change, they were particularly interested in the sustainability features that come standard on each property: rooftop solar panels (photovoltaic electricity), back-up generators, and energy-efficient double-pane windows. Heat pumps (which also provide air conditioning) and solar hot water are optional.

“I really like the small energy footprint that’s possible because of the solar panels,” McIntosh says. “We all individually need to make lifestyle choices for more-efficient energy consumption. It’s just another aspect that seems like an excellent fit for me.” 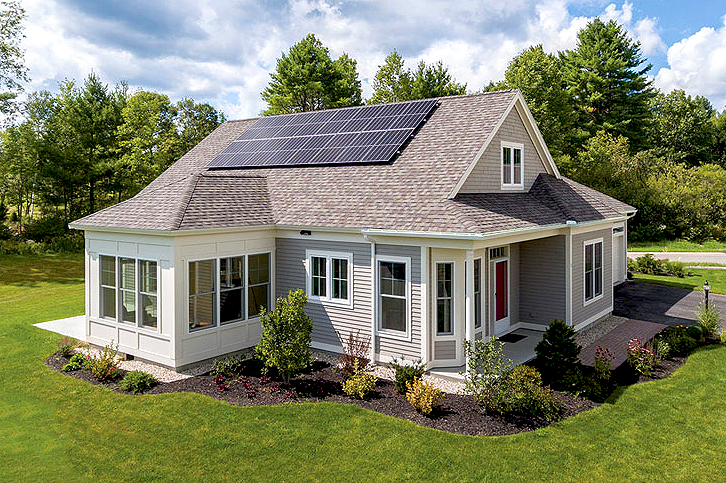 Sustainability features of Cumberland Crossing include rooftop solar panels, backup generators, and energy-efficient windows. Each cottage also includes property maintenance, and residents have access to all amenities at OceanView, including the swimming pool and fitness center.

Those features were also a huge draw for Adams and Hopkinson, who had solar panels installed on a home they’d owned in the past. “We feel really strongly about protecting our planet for the folks who are coming after us,” Hopkinson says.

They’re also happy to be in a place where the natural beauty feels easier to reach than it did in California, where they were 45 minutes from the ocean. Since they moved, they’ve enjoyed hiking in nearby places like Mackworth Island. The couple had lived most of their adult lives in the region, and loved the Portland area. “While the mountains were beautiful, New England has its own kind of beauty, and it feels more like home.”